You know it may surprise some people but pit bulls are not naturally aggressive towards people. In fact they should be by their ancestry the least likely to attack their owners or other people! To understand this let's go back in time to England and Ireland when bull and bear baiting was the major sport of the day. It was a brutal and ugly sport but even Queen Elizabeth I was so into it she actually bred baiting dogs to use as entertainment for visiting dignitaries. The first baiting dogs were bred using English Bulldogs with terrier breeds to get more agility and the trait of "gameness". Gameness is the trait of not giving up on a task even upon pain of death. This is where the myth of locking jaws comes from. It is not that their jaws lock (their jaws are no different than any other breed) but it is gameness that makes them hold on and not let go. It is also where the myth that they do not feel pain comes from. It is not that they don't feel pain, again it is gameness that helps them ignore the pain until the task is finished.

But I digress, Bull and bear baiting began to fall out of favor in the early 19th century and in 1835 the sport became illegal. With the ending of their favorite sport the people that bred them needed to find another way to use them. At first they turned to rat baiting throwing rats in pits and having the dogs go after them. This was not satisfying enough so they began training them to fight each other. Now this is where the reason for them not being naturally prone to attacking humans comes in. The breeders/dog fighters knew they would have to go into the pit to break them up after the fight was done. Of course they were smart enough to know they couldn't have their dogs turning on them, so they began culling dogs that showed any sign of aggression towards people. They basically bred human aggression out of them. This is why you see so many pictures from this period of pit bulls with children. The fact is while they were fierce fighters in the pit, at home they were loving family members that would rather cuddle next to their children than do anything else. So today when you hear of attacks against people or more recently the mauling and killing of a couple owners (by what were purported to be pit bulls) this goes totally against the true nature of the breed. If these were pit bulls I would like to be able to follow their ancestry and you can bet they would have come from a backyard breeder or a disgusting puppy mill.

Now I have come to believe after much research on these dogs is that there is only one true pit bull and that is the American Pit Bull Terrier. There are 2 other breeds that were also bred to fight in England and Ireland. These are the Staffordshire Bull Terrier and the English Bull Terrier. Both of these breeds were bred to fight but they were called bulldogs or bully breeds. There is also doubt that the APBT and these other 2 breeds were actually bred from the same bloodlines. In 1865 the dog that was to become the APBT was brought to America and was mostly exclusively used in fighting here. in 1898 a man named Chauncey Z. Bennett founded the United Kennel club to not only recognize the APBT (because the AKC would not) but also to register all working, sport and hunting dogs. He thought that the AKC was full of a bunch of stuffy rich pansies that were only interested in show dogs while they sat around and sipped wine while eating cheese crackers. In other words he didn't think much of them! Chauncey's dog Bennett's Ring was the first dog registered as APBT #1. This is one of the firsts for the UKC having a number system for each dog so they could trace them and their ancestry. In 1936 after years of wrangling the AKC finally relented and allowed the first APBT to be registered. Only not until they changed their name to the Staffordshire Terrier to reflect the area they were believed to have originated in England. They kept this name until shortly after 1972 when the AKC registered the first of the English cousins, the Staffordshire Bull Terrier. In 1973 they were renamed The American Staffordshire Terrier to avoid any confusion. This is where the APBT and the AmStaff begin to split. While the APBT continued to be bred as fighting and sport dogs the AmStaff began to be used for show and conformation. There were a few that were bred for fighting but they quickly fell out of favor and that trait fell exclusively to the APBT. Since this time their bloodlines have completely split.

It is important to note here that while APBT's were used exclusively for fighting this wasn't their main function. As a matter of fact there were just a few bloodlines that were used for fighting, The rest were used for sports like agility and strength, weight pulling, hunting and other activities. But their main function was as family dogs...yes you heard that right...family dogs. This was out of their true nature to love and please their master. They would much rather cuddle and lick the faces of their owners than just about anything else. So much was this so that in the first half of the 20th century they were known as America's dog. They were used to sell big name products of the time, such as RCA Victor and Buster Brown shoes. They were shown on the cover of Life Magazine more than any other breed. They were owned by such famous people as Helen Keller and Teddy Roosevelt and of course the biggest hero of his day, Sgt. Stubby, the most decorated dog soldier of all time. He helped root out spies and was credited with saving the lives of his fellow soldiers during World War One. So what happened to this magnificent majestic breed, did they change? Did they suddenly turn into ferocious beasts on their own? No! the only thing that changed was humans, the only dangerous breed that exists. Too many people stopped being their protector and instead became their arch nemesis. We humans began exploiting them and using them as pawns in our own sick games. Humans were responsible for teaching them to fight and using their strength as status symbols to make them look tough. Gangs and drug dealers began using them as guard dogs for their stash, training them to snarl and snap so they would scare people and make themselves feel strong. Dog fighting became an epidemic and our beloved breed began to feel more pain and sorrow than they had ever known.

Then in 1987 an article was published by Sports Illustrated with the cover: "Beware of this dog" showing a snarling dog and titled: "The Pit Bull Friend and Killer". This is thought to be the turning point when instead of being America's dog they were cast as blood thirsty killers. People started crossing the street when they saw one and new laws were being enacted to rid cities and states of what they believed were dogs that wanted to kill everyone. This hysteria continues to this day with politicians trying to look like they are protecting people enact "Breed Specific Legislation" to ban any dog that has a look that is considered to be a pit bull. The sad part is these laws actually protect no one! All they do is give people a false sense of security and tragically break up families and kill innocent dogs. All for no other reason than because of how they look. If they were humans this would be considered racism and murder but since they are "only dogs" it is considered public safety. This is not only immoral it is also totally unnecessary and ineffective. In areas where these laws have been put in place dog bites have not decreased but actually increased. People are not safer they are actually in more peril, because the idiots that use these breeds to fight and attack just turn to other breeds. Not to mention the fact that there are other breeds that are much more aggressive towards humans that people turn to as pets who have a higher incident of attacks than the breeds they banished.
The fact is the only way to make people safer is not to ban breeds but to enact common sense laws that really work. They are called "Dangerous Dog" ordinances that instead of going after specific breeds they target individual dogs and the real culprit... "owners" These are the real perpetrators people that should never have been allowed to have a dog in the first place. So let me end this by saying that we are at a time when areas that have passed BSL laws are beginning to rethink their decision and repealing them. Now it is up to us the responsible owners, advocates, rescuers and all sensible and caring people to put an end to this tragic and inhumane era in our history and save these majestic creatures from their unspeakable fate. We must work harder than ever before to show everyone that they don't need to be fearful of a breed, They need to be fearful of humans the true and only monsters there are! 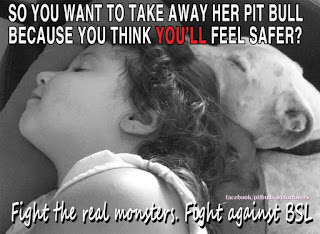 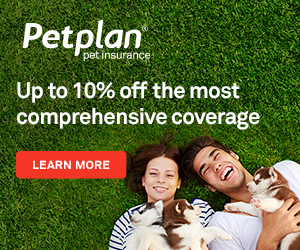 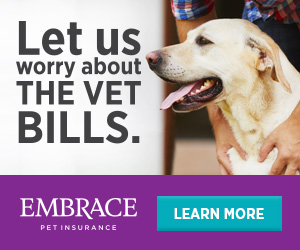